The road to Paris 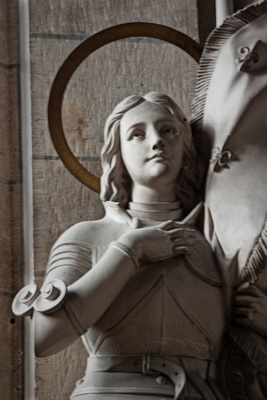 places and, as I was travelling with Gilly, it of course involved stopping at German bunkers, war memorials and Occupation Museums on the way. It is lucky for Gilly that I have an interest in her research, lucky for me that she usually recognises when I have had enough, and lucky for you that I don't feel the need to bore you with photographs of every Memorial des Martres along the way.

We drove at lunchtime to Folkstone arriving early for our train and, although the directions are initially a little confusing, I was impressed that we were put on the next train with no fuss and therefore arrived earlier than expected in Calais.

The whole process seems strange to me. Coming from an Island I am used to getting on a boat or plane in order to get anywhere at all. But in Folkstone you drive on to a train, sit in your car for a while, and then when you drive off again everybody is speaking French! You don't even get to see fish swimming past the window on the way!

Our first stop was at La Coupole, a WWII facility for manufacturing and launching V2 rockets aimed at the UK. This is now a large museum telling the story of the war in France and of the Nazi genocide but surprisingly little about the structure that we were standing in.

Next we drove to St Omer where we checked in to a hotel and after a brief walk around the town centre we found a quirky little back street restaurant with great food. 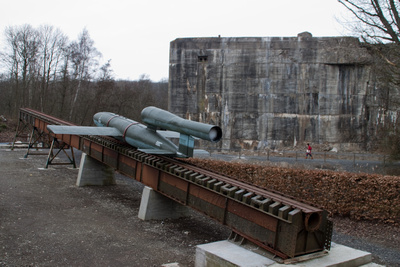 In the morning we visited the “Blockhaus” at Éperlecques which was the largest bunker in Northern France and an important part of the Atlantic Wall. The bunker suffered a direct hit on several occasions with only minor damage. It was only after a Tall Boy bomb landed 100 meters North of the bunker with the effect of a mini earthquake that there was significant damage causing the bunker to be abandoned. Today only a small part of the bunker is open to the public but it is still a truly impressive structure. 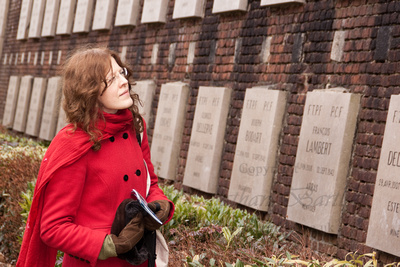 En route to Paris there was one more stop that Gilly wanted to make and that was in Arras where 218 “patriots of all origins” were shot in the ditches of the citadel between 1941 and 1944. Their names on plaques line the walls of the ditch and a small memorial notice at the entrance acknowledges their sacrifice.

Nearby is one of the many war grave cemeteries that litter the countryside of Northern France. American soldiers were, as a rule, buried in massive cemeteries in their thousands; the bodies of German soldiers were repatriated; British soldiers were interred in small cemeteries near to where they fell and the burial grounds are maintained by the Imperial War Graves Commission. 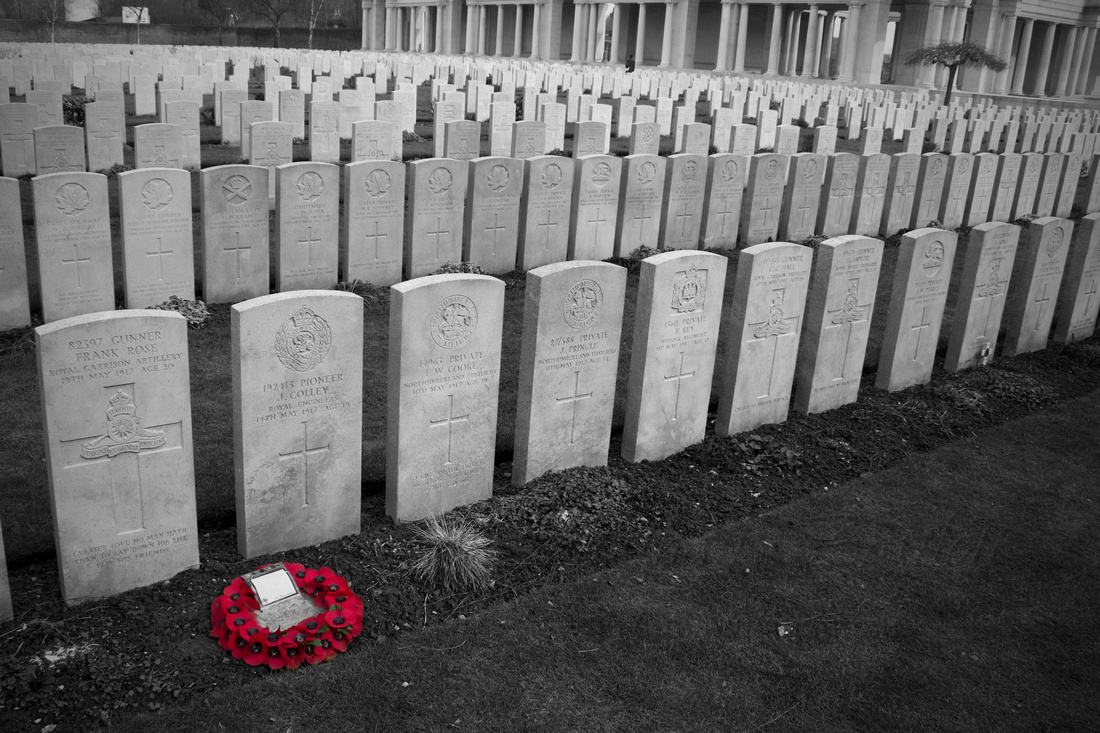 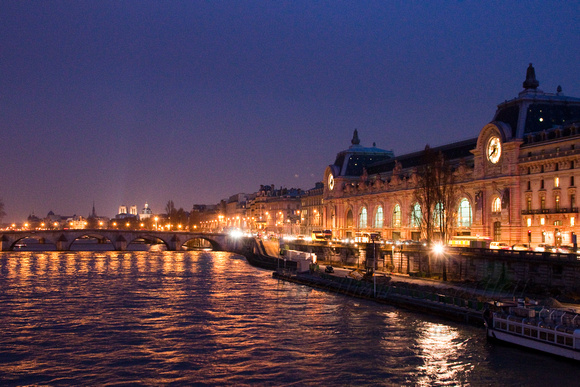 At last we arrived in Paris where an evening stroll around the city produced some good night shots despite having left my tripod behind at the hotel.

In the morning mist I took this shot of the lights on Pont Alexandre III. 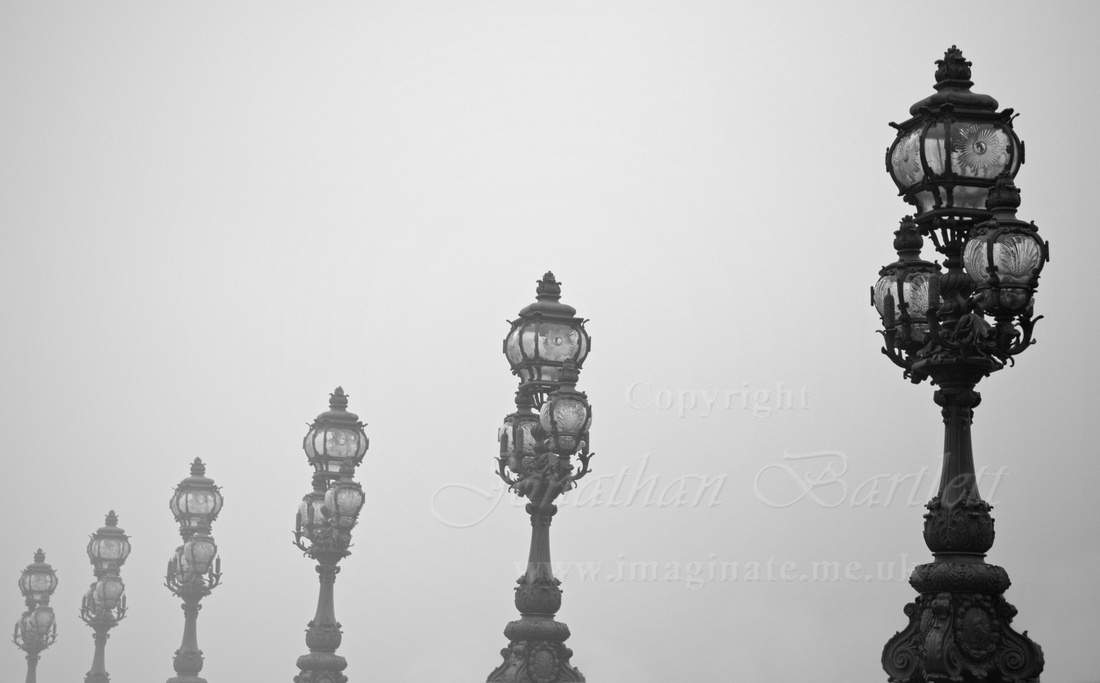 The following day I wanted to visit the Père Lachaise cemetery and was quite surprised at how enthusiastic Gilly was to join me; I should have known that there would be a whole section of war memorials there encompassing both world wars. This is also the site of the Mur des Fédérés where, in 1871, 147 Communards (the last defenders of the workers) were shot. 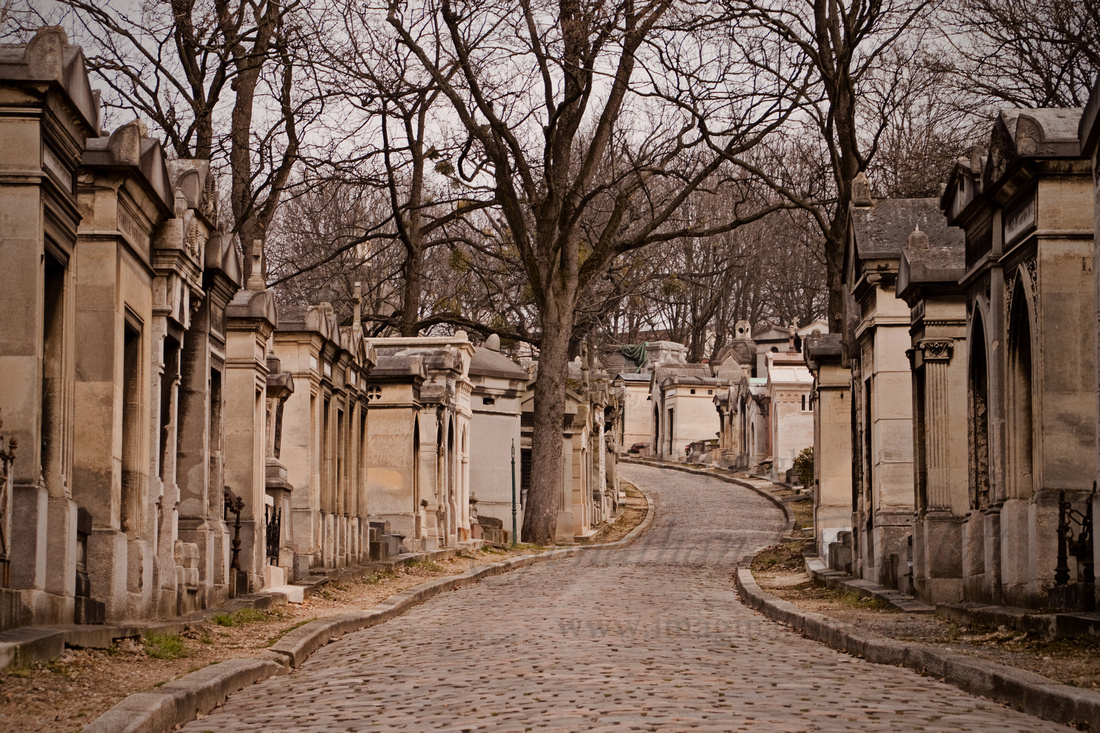 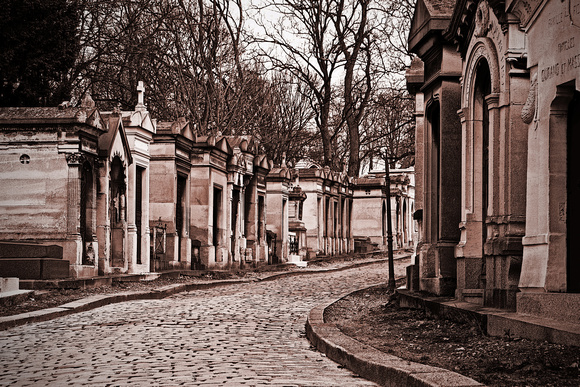 Père Lachaise is the largest cemetery in the city of Paris (110 acres) and is reputed to be the world's most visited cemetery, attracting hundreds of thousands of visitors every year to the graves of the rich and famous of France over the last 200 years. Those *inhumed here include (in no particular order) Oscar Wilde, Frédéric Chopin, Sophie Blanchard (professional balloonist and first woman to die in an aviation accident), Marcel Marceau, Samuel Hahnemann (founder of Homeopathy), Jim Morrison, Édith Piaf, Gioachino Rossini, Moliére and over 1 million others.

*Pedants will know that the word inhumed does not appear in the dictionary but this is surely the opposite of exhumed! Terry Pratchet fans will know that I have borrowed the word from Disc World. 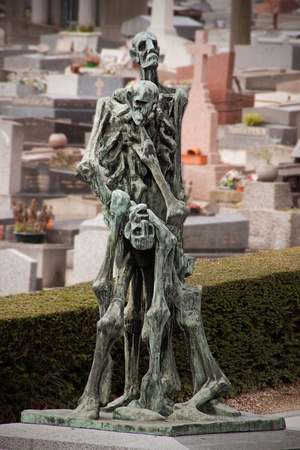 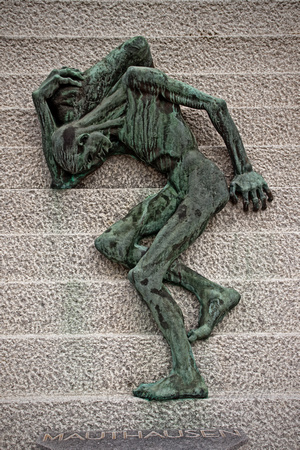 The photography in this section is dramatic as the memorials are quite graphic and the mood  here more sombre and subdued than in other parts of what has become a morbid but popular tourist attraction.

If anybody reading this does not know the names Auchwitz, Mauthausen, Ravensbruck etc. then I shall not dwell on what happened there but you seriously need to read more 20th Century history. 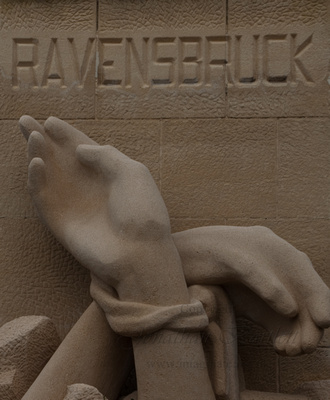 On the left bank of the Seine (The French refer to the left and right banks of the Seine which is confusing as the river snakes and turns hrough the city. The direction assumes that you are travelling downstream in a generally East to West direction.) the Musée d’Orsay is housed in an impressive 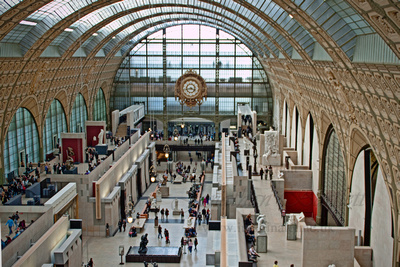 former railway station built at the turn of the 20th century.

Of course I wanted to see the numerous works of art on display in the largest collection of Impressionist and post-impressionist masterpieces in the world, but I was also aware that there would be a couple of photographic opportunities. 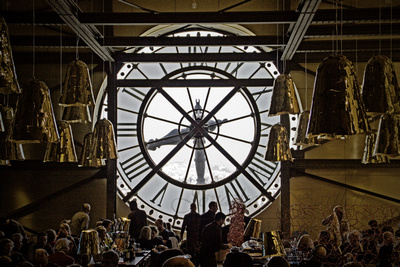 Pictured here are the Main Hall and the clock in the 5th floor café, both of which I wanted to photograph. I was told off by a guard for taking pictures of the Main Hall but I refused to let this stop me as everybody with a camera or mobile phone was doing the same with little effort on the part of the museum to stop them. Besides I had had my camera around my neck as I passed through security on the way in and they had not thought to mention it. I decided to have a look at the Monet exhibition and on my way came across a clock that I had not known existed. It was surrounded by crowds of people so I waited for the throng to part and my patience was rewarded when, in a brief quiet moment, a couple came to stand in front of the clock to look at the view of the city beyond. This is my favourite image of the whole trip. 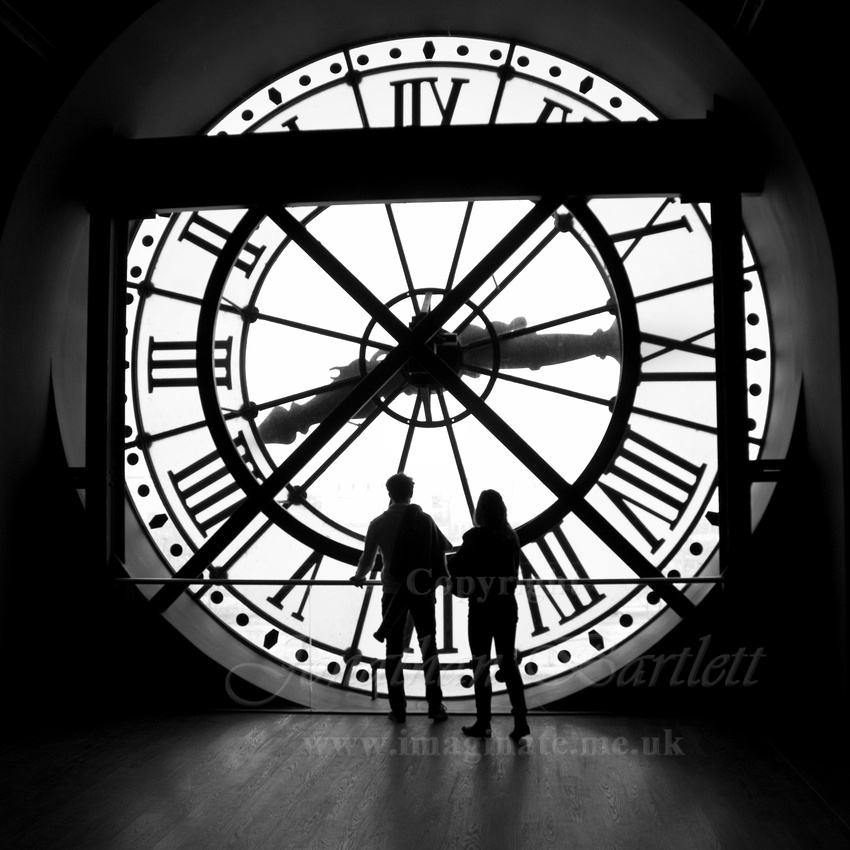 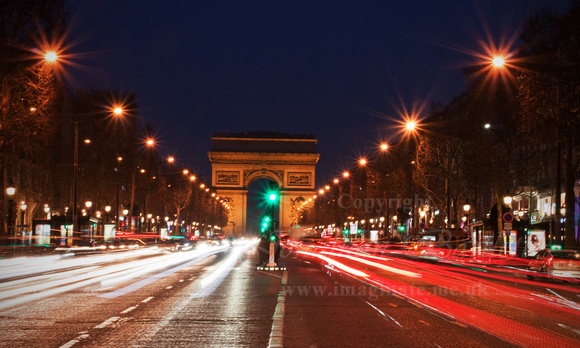 In the evening there was a particular night shot that I had in mind of the Arc de Triomphe from Avenue des Champs-Élysées; this was not as dangerous as it might look as there was a traffic island in the middle of the road where I could set up my tripod. 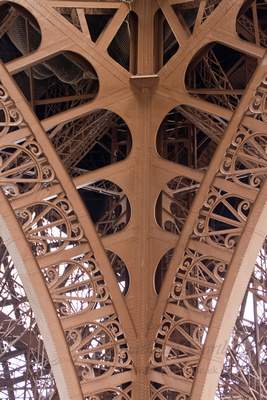 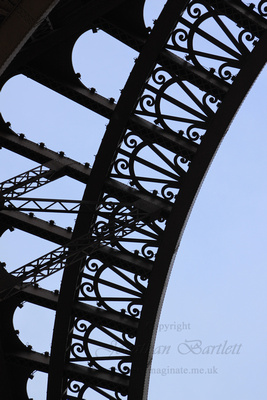 My pictures of the Eiffel Tower then, apart from the obvious tourist shots, were these rather more abstract close up shots. Built in 1889 as the entrance arch to The World's Fair, the Eiffel Tower was only intended to be a temporary structure.

The French really know how to build a war memorial and despite their modern reputation as “cheese-eating surrender monkeys” they have the most successful military history in Europe. The Arc de Triomphe de l'Étoile (not to be confused with the smaller Arc de Triomphe du Carrousel) was commissioned by Emperor Napoleon in 1806 at the peak of his fortunes but not completed until 1836.

The arch honours those who fought and died in the French Revolutionary and Napoleonic wars and was one of the first two symbolic sites for a Tomb of the Unknown Soldier 1921 (the other being in Westminster Abbey). Many other plaques and memorials now adorn the site from various nationally and historically important conflicts.

I had carefully checked out the opening times of the arch in advance as I wanted to go inside. It opens at 10.00am every day of the year. . . except on the day that I wanted to go up when it was closed due to several thousand bigots parading through Paris to protest against gay marriage. Our departure from Paris was thus delayed by an hour as I made my way to the Place Charles de Gaulle the following morning. 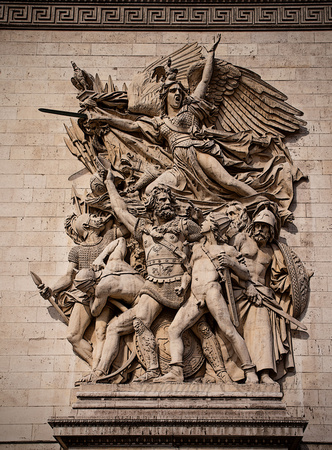 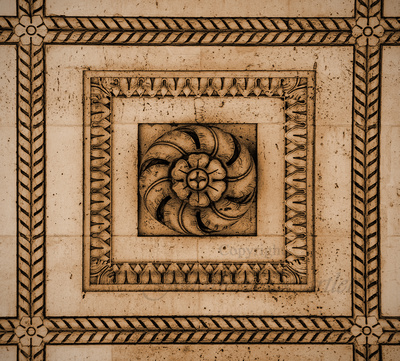 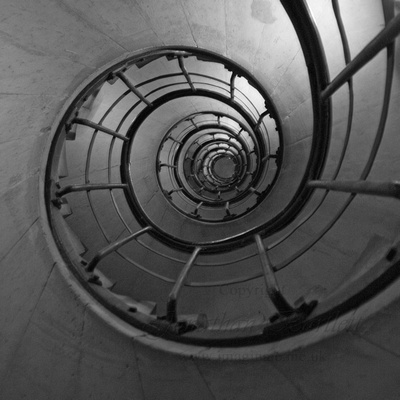 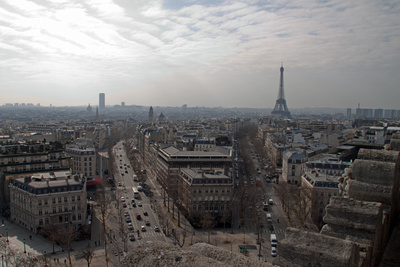 At the start of the 49.5M (162ft) climb up the inside of the Arc de Triomphe I looked up and couldn't resist this abstract shot of the spiral staircase. Inescapably it reminds me of that great national dish of France: Les escargots - Snails (delicious for those of you who have not tried them!).

From the top there are stunning views across the city in all directions, up the Avenue de le Grande Armée towards the commercial centre and the West, across town toward the Eiffel Tower to the South and the distant Sacre Cœur to the North East. 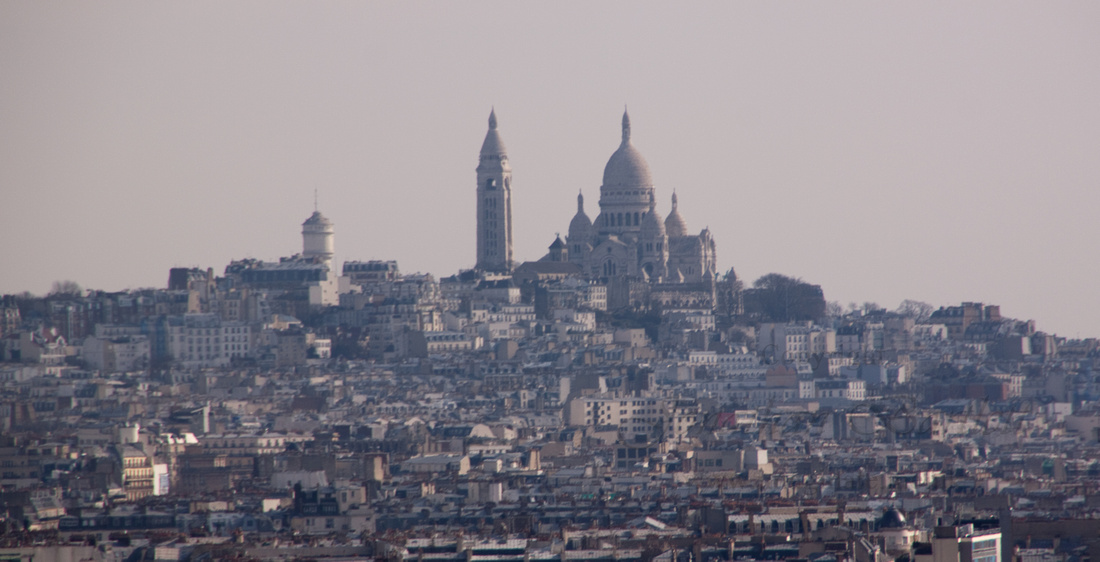 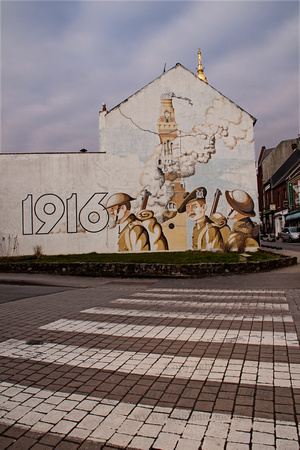 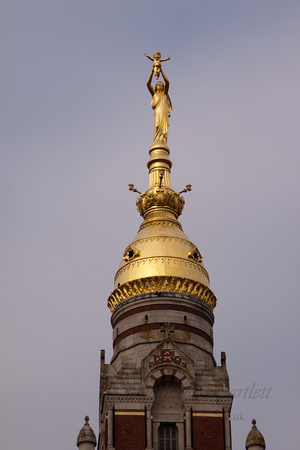 After Paris we headed back north towards Calais but before settling in a charming old farmhouse for the night we stopped to look at a mural. Painted in July 1996 it tells the story of the local church which was hit by a bomb in 1916 causing the statue of the Madona on top of the spire to lean precariously. The legend grew up that when the statue fell the war would end, leading tired soldiers to take pot shots at the statue to make it fall and thus hasten the end of the war. The restored statue can just be seen in the background of my photograph above the mural.

Finally the obligatory stop at the hypermarche to stock the car up with food and drink.

I had not been to Paris since I was a child and, like any capital city, found that there are a million and one things to do and see for everybody whatever your taste. I love France and the French people (most of them) and found the Parisians to be friendly and helpful. They do like you to at least try to speak their language which I consider fair, and I am able to hold a basic conversation in french which definitely helps. The food is fantastic, especially if you are prepared to step outside of your comfort zone; I love seafood, éscargots, frogs legs and have even eaten horse steak in the past (at least the french are honest with their labeling!).

My advice: Do not drive in Paris without a sat nav. Park the car up and either walk or use the Metro.

Will I go again? DEFINITELY!

Ann Holland(non-registered)
Love the pics and blog Jon. As always you are a fantastic story teller and your words add hidden depths to your wonderful talent of photography. I look forward to your next holiday and the opportunity we all have of sharing your travels via this site.:)xx
George Malik(non-registered)
Fantastic blog and pictures Jon. Very informative and wonderful to ponder over.
No comments posted.
Loading...